Liverpool booked its ticket to the FA Cup final in a nervy 3-2 win over Man City.

The deadlock was broken within the first 10 minutes when Liverpool defender Ibrahima Konaté rose highest to slam home a powerful header from a corner.

And the afternoon went from bad to worse for City when goalkeeper Zack Steffen wanted too much time on the ball, allowing Sadio Mané to slide in and dispossess the US international to double the lead.

And on the stroke of halftime, Liverpool's lead was three as Mané rifled in at the near post, past a despairing Steffen.

Just went all seemed lost for City, Jack Grealish popped up with a goal minutes after the break to give his side hope, and Bernardo Silva tapped in from close range in the 90th minute to ensure a nervy ending.

But it wasn't enough as Liverpool progressed to the final where it will face either Chelsea or Crystal Palace who face off on Sunday.

Mané told the BBC afterwards that the day was "special."

"We were playing one of the best teams in the world. To win this kind of game, especially in a semifinal, is a big, big, big win," he said.

"We were very pleased to win and qualify for the final. We started very well, everybody started on the front foot -- for my first goal, the goalkeeper made a mistake, but I think we pushed him to make that mistake. That is our style and I think that made the difference."

The finest do battle

Red and blue, resplendent in the London sun.

Two of the world's best teams doing battle -- a week after their last encounter -- for a spot in the final of football's oldest competition.

For neutrals, there couldn't be a more perfect setting: a packed stadium, beautiful weather and some football's stars on show.

And, like their thrilling 2-2 draw last Sunday, the game began at a red-hot pace.

With both popping the ball around with zip and verve, the first goal came through a more agricultural route. 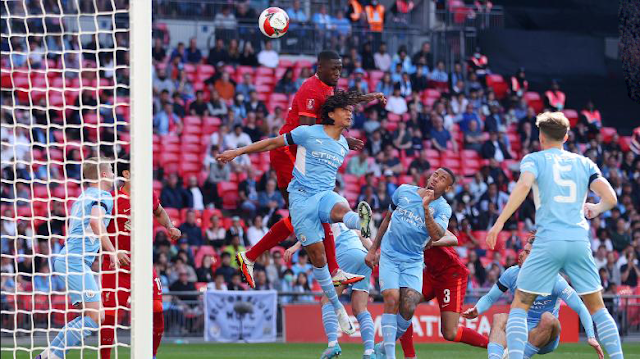 Konaté scoring the opening goal of the FA Cup semifinal.

Liverpool defender Konaté continued his rich vein of goalscoring form as he powered home a header from his side's opening corner of the game -- his third goal in as many games.

The red end of Wembley was jumping with joy just eight minutes later.

As City tried to play out from defense as they typically do so well, Steffen -- City's cup goalkeeper -- wanted just fractions too long on the ball, allowing Mané to slide in and tackle the ball home.

The moment bore striking similarities to their clash in the Premier League last week, when regular starter Ederson also dallied on the ball but was just able to nick the ball away in time ahead of the on-rushing attacker. 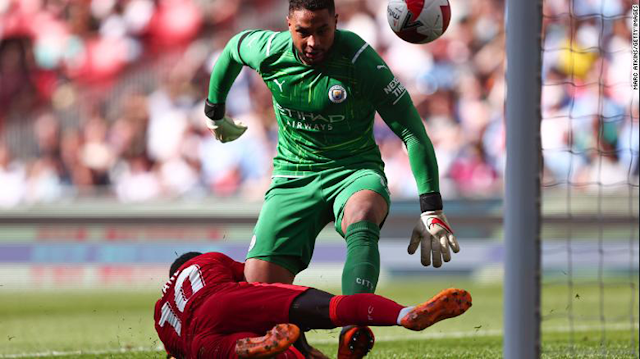 Shell-shocked by two goals, Manchester City finally was able to gain a foothold in the encounter, as the reigning Premier League champions pushed to get back in the game.

But that pressure left space which Mané was able to exploit to further extend Liverpool's lead on the stroke of halftime.

Some intricate play between Liverpool's attackers prized an opening ajar for the Senegal star to slam the ball home with Steffen given no chance.

Liverpool was rampant and probably did not want the halftime whistle to come when it did.

And with manager Pep Guardiola's words ringing in its ears, City made a much-improved start to the second half.

England international Jack Grealish fired his finish into the top corner after some neat play from Gabriel Jesus opened up a shooting opportunity. 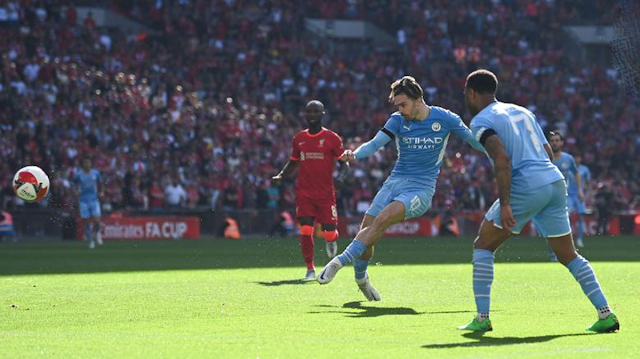 The goal sparked the City players -- and fans -- into life after a poor opening 45 minutes, with their attacks looking much more threatening.

Jesus could have drawn City to within just a goal as his well-timed run had him through on goal, only for his Brazil teammate Alisson to deny him deftly.

Although Man City pushed, it was actually Liverpool who had the better of the chances, with Mohamed Salah unable to convert any of his attempts.

Just when all hope seemed lost, an excellent touch and run from substitute Riyad Mahrez left Silva with the easiest finish to leave City trailing by just one goal with four minutes of added time remaining.

Raheem Sterling had a chance to score against his old club and be the hero with one of the final touches of the game but could only shoot straight at Alisson.

And despite some chaotic scenes in the City box, Liverpool was able to hang on and advance to the final and ensure that a historic quadruple -- the Premier League title, the Champions League, the FA Cup and the League Cup -- is still possible.

So far, Liverpool has already won the League Cup title, is second in the Premier League -- a point behind City -- is into the Champions League semifinals and now is into the FA Cup final.

When asked about whether the quadruple is an aspiration of theirs, Mané said it was a "dream."