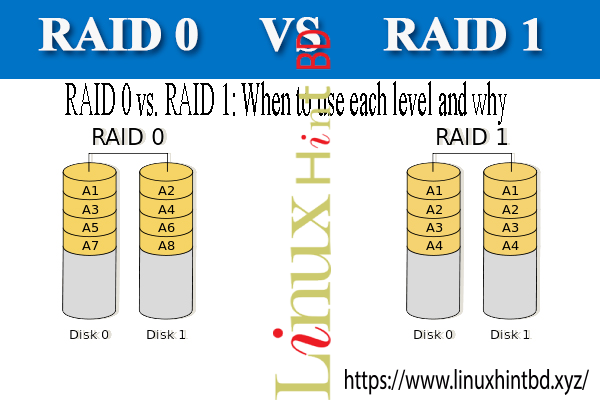 RAID is a technology that combines two or more disk arrays into logical units, so it behaves as a single drive to provide benefits such as improved performance, better fault tolerance, and enhanced reliability. This grouping can be implemented through hardware or software. These disks can be grouped in many types of configurations called RAID levels. Some of the popular types are RAID 0, RAID 1, RAID 5, RAID 6, and RAID10. Each of these RAID levels is designed to achieve a specific goal. In this article, let’s take a look at the differences between RAID0 and RAID 1, their benefits, shortcomings, and which works well in different situations.

Also called diskstriping, this configuration divides data across different disks, so the read-write can happen simultaneously across multiple disks and, in the process, improve its overall speed. Here, a stripe is the data that is divided across multiple disks while a striped unit is the data available on a single drive. This striping can happen in many ways. For example, let’s say we have 10 hard disks and 32MB of data that has to be striped across the different disks. Some systems might stripe 1KB of data from disk 1 to 10 and then start all over again while others could stripe data through the odd numbers first and the even numbers next. It depends on whether the striping happens at the byte, block, or partition levels.

The advantages of RAID 0 are:

The downside of RAID 0 is that it has no parity and hence no-fault tolerance. This means, if your data is corrupted or lost, there is no resiliency or back up, and it’s impossible to retrieve the lost data. This makes RAID 0 completely unsuitable for critical data.

Also called mirroring, this RAID level replicates data across two or more disks for better redundancy. This configuration requires a minimum of two drives, so data can be written to both simultaneously. This makes read operations fast as the data can be read from both the drives at the same time. However, write operations will be slower since the data has to be written to two disks.

Now, let’s run through some real-life scenarios and the ideal RAID level for each.

You have a situation where you want the read and write to be super quick, but the data is not so critical. This means, even if there is a data loss or corruption, it doesn’t affect your business as long as the read-write is quick.

The best example of this scenario is caching live stream video. Here, speed and performance take precedence over data loss and corruption, and for this scenario, RAID 0 is the best choice.

Your goal is to provide quick results to your users, so high-speed I/O is a must. At the same time, you’re not so worried about the loss of data as you have a master copy in another storage device that can be recovered easily when needed.

In this case, RAID 0 is the best choice.

If you have more data to store and run out of disk space, RAID 0 is a good choice as there are no overheads, and the entire disk space will be used for storing. That said, there’s no fault tolerance or backup either, so the data you want to store must be non-critical and shouldn’t impact your business even if it’s lost or corrupted.

When you want to store critical and sensitive data, RAID 1 is your best bet as it mirrors data on two disks, so even if there is a problem with the primary disk, you can always retrieve the content from the second one.

In general, RAID 1 is a good choice if data redundancy is a key feature of your storage needs.

It’s important to note that RAID 1 is not a backup option because when a corrupted data is sent from the operating system, it writes to both the drives, thereby corrupting both the drives.

Many gamers like to use RAID 0 because it is easy to set up and offers considerably faster speeds that, in turn, enhances their gaming experience. But some gamers don’t prefer using RAID 0 because of the possibility of data loss while many enjoy its increased throughput. It’s a personal choice between data safety and high speed.

RAID 0 or RAID 1? It comes down to performance or data redundancy

RAID 0 and RAID 1 are two types of configurations or levels that can be set up with an array of independent disks. RAID 0 offers striping, which translates to better performance, but no-fault tolerance or data redundancy. RAID 1, on the other hand, offers mirroring, so the same data is available in two disks. RAID 1 is slightly slower than RAID 0 because there are two writes, but the read operations are equally fast.

Due to the above differences, these RAID levels work well in different scenarios. In general, when you need performance over data redundancy, RAID 0 is your choice, while RAID 1 is the choice when you’re handling mission-critical data where redundancy is a must.

We hope the above situations give you a better idea of where to use RAID 0 and RAID 1. For more on RAID levels, check the links below for other articles in this series. And do share with our readers the different situations where you have used the two levels we talked about in this article.