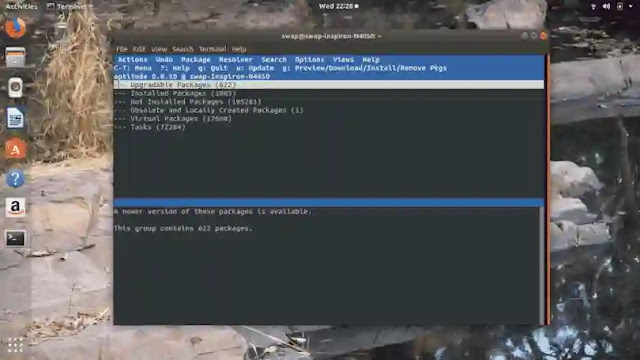 Normal Linux user knows almost all the basic Linux day-to-day use commands to perform basic task such as installing any application, copying files from one directory to another, etc. But in this article I’m going to list 100 essential Linux commands which can be useful for every Linux user right from the noobs to the professional Linux developers and system administrators. So before wasting any time let’s get started with this huge list of essential Linux commands.

This command can be used to get the contents of the file as an output in the Terminal window. You just need to write the cat command as shown sample screenshot and execute it.

As the name suggests this command can be used to create, view and concatenate files.

If the file is longer than the size of Terminal window then it will be not easy to read or view all the content of the file easily. But there is a tweak, you can use less with cat command. It will give user an ability to scroll forward and backward through the content of the files using PgUp and PgDn keys or Up and Down Arrow keys on the keyboard.

Finally to quit from the less you can just type in q.

First of all you need to install or update aptitude package in your system using following command.

Once the installation is complete you can type aptitude in Terminal and execute it, this will open up aptitude interface as you can see in screenshot below.

You can use this aptitude built-in interface to update, install or remove any application package on Linux or its other distributions.

You can use cal command in Terminal window to see the calendar, as you can see in the following screenshot I have executed command to view the calendar of the current month and you can notice it highlighted the date as well.

You can also view the calendar of an entire year by executing command shown in following screen shot.

bc is another cool and useful command for Linux users as it allows you to enable command line calculator in Linux Terminal when you execude following command.

You can make any calculation in Terminal window itself, isn’t that cool command to have at your service?

The Linux command chage is an acronym for change age and it can be used to change the expiry information of the user’s password.

As you can see in the above screenshot you can also force the user to change the password after certain period of time i.e. periodically. This is an excellent command for system administrators.

You can get all the information of your file system just by executing df command in the Terminal window.

If you use df –h it will display file system information in human readable format as you can notice in following screenshot.

When you execute this help command in Terminal window, it will list all built-in commands you can use in shell.

As the name Print Work Directory suggests, this command the path of the directory currently you’re working in. This command is very useful for all the Linux noobs and those who are new to Linux Terminal.

I think I don’t need to introduce to this command as this is one of the commonly used commands in Terminal by Linux users.

When you type and execute ls command in Terminal, it will show you all the contents of the particular directory i.e. both files as well as directories as you can see in above screenshot.

There are well over 100 Unix commands shared by the Linux kernel and other Unix-like operating systems. If you are interested in the commands frequently used by Linux sysadmins and power users, you’ve come to the place. Recently, I published a five-part series covering commands often used by Linux sysadmins.
Below I’ve listed the 90 commands covered and links to each of the five posts in this series. Some of the commands listed include links to related articles. There are also thousands of commands available if we include downloadable software and scripts, such as bpytop (pictured below). However, for this article’s purpose, we will cover mostly Unix commands used on Linux by sysadmins and power users. If you find this page useful, let me know if you’d like to see similar posts in the future.

Linux Commands frequently used by Linux Sysadmins – Part 5:
70. vi – text editor.
71. cat – display file contents.
72. tac – output file contents, in reverse.
73. more – display file contents one screen/page at a time.
74. less – similar to the more command with additional features.
75. tail – used to display the tail end of a text file or piped data.
76. dmesg – prints the message buffer of the kernel ring.
77. journalctl – query the systemd journal.
78. kill – terminate a process.
79. killall  – Sends a kill signal to all instances of a process by name.
80. sleep – suspends program execution for a specified time.
81. wait – Suspend script execution until all jobs running in the background have been terminated.
82. nohup – Run Commands in the Background.
83. screen – hold a session open on a remote server. (also a full-screen window manager)
84. tmux – a terminal multiplexer.
85. passwd – change a user’s password.
86. chpassword –
87. mount / umount – provides access to an entire filesystem in one directory.
88. systemctl – Managing Services (Daemons).
89. clear – clears the screen of the terminal.
90. env -Run a command in a modified environment.