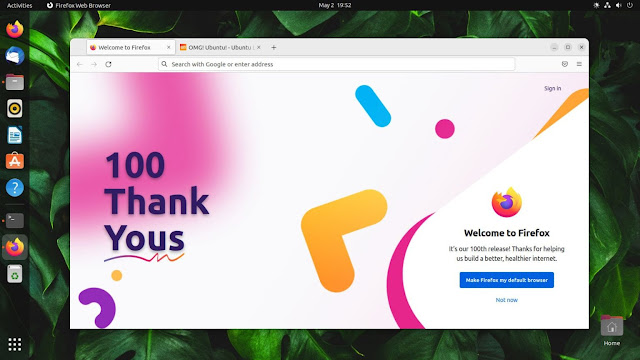 The 100th release of open source web browser Mozilla Firefox is now available to download for Windows, macOS, and Linux.

Mozilla reaches this monumental milestone thanks, in part, to a sped-up release cycle. A new build of the browser is issued more or less every month since 2019.

Even so, this is still an occasion worth celebrating.

— you get to enjoy GTK overlay scrollbars in Firefox 100. We talked up this addition in the previous release, Firefox 99. These subtler scroll points don’t revolutionise the web, but they help make the browser look more at home on modern Linux desktops.

If you’re on Windows — no judgement here — then you also get new slimmer scrollbars, with the browser following the system accessibility setting. Windows users get hardware accelerated AV1 video on supported Intel, AMD, and NVIDIA GPUs.

Other changes include support for captions and subtitles in Picture-in-Picture mode for a select number of video streaming sites. PIP is the little pop-out player that is available when viewing some video services, including YouTube, Amazon Prime Video, and Netflix. Firefox’s built-in spellchecker can handle proofing from multiple language dictionaries at the same time. Sounds like a headache; I struggle to proof in my native tongue!

Also new in Firefox 100 is a ‘website appearance’ section in the system settings. Here you can set your dark mode preferences for websites that support it (not this one, sadly – dark mode support is still on the to-do card in the omg Trello). Firefox gives you four choices here: follow Firefox setting, system setting, light, or dark.

Lots of bug fixes are included too.

Notable Linux fixes include resolving an issue where maximised windows would get stuck in their initial size when restoring a previous session; ironing out Wayland-related woes with the bookmark panel jumping and other menus flashing; and bumping the contrast of the active tab under system dark mode.

Firefox 100 is free, open source software available for Windows, macOS, and Linux. You can download the latest release from the official Firefox website. Existing users will get this update automatically via an in-app update or, on Ubuntu, via the Snap Store or Ubuntu repo.

Side note: if you want to replace the Firefox Snap with the Firefox deb on Ubuntu, we wrote a guide on it last week. It’s probably not something everyone should do as Ubuntu devs say better Firefox Snap performance is on the way.