A quick way to make Ubuntu feel faster is to disable desktop animations.

Turning animations off in Ubuntu is a guaranteed way to get better performance on older and lower spec’d computers. Desktop effects are pretty but they do require ample system resources to run smoothly.

Of course, desktop animations in Ubuntu —heck: any major end-user OS, at that— serve a purpose. While blingy transitions might seem over-the-top they’re not pointless or without merit. Visual effects make the desktop interface feel more fluid and graceful in use.

But this sometimes come at a cost: speed, be it tangible speed or merely the perception of speed.

Think about it: each time you open the Application grid in Ubuntu you have to wait a few moments for it to animate in. The same happens when you switch back and forth between workspaces, open an app, or minimise/restore a window to/from the Ubuntu dock.

On a slow computer those fades in and out can stutter to the point of inelegance; or for those susceptible to motion sickness, make them feel queasy.

Fortunately, you can disable most of the animations, transitions, and effects used in Ubuntu 22.04 LTS. You won’t need any additional apps or terminal commands to do it either.

Turn Off UI Animations in Ubuntu 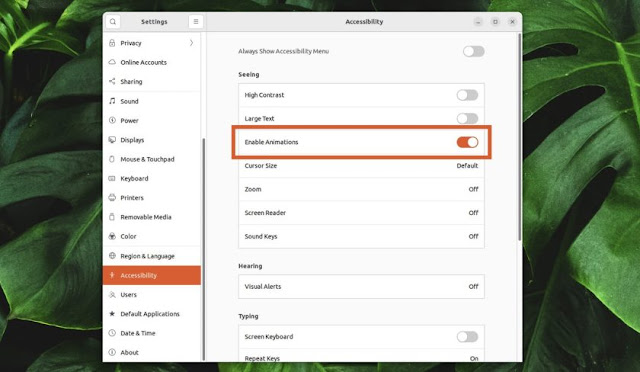 In Ubuntu 22.04 LTS you just need to the Settings app and select the “Accessibility” section from the sidebar. In the main pane locate section titled ‘Seeing’ and the the “Enable Animations” option underneath.

Slide the toggle next to ‘Enable Animations’ to the off position (greyed out; left).

It’s an all-or-nothing option; you can’t disable specific effects (but keep reading for a tip on something that can).

Should you find, at a later date, you’re unable to enjoy your system sans UI niceties you can repeat the steps above, but this time slide the ‘Enable Animations’ toggle to the ‘on’ (coloured) position.

Disabling Desktop Effects — Worth It?

I can’t say that the Ubuntu experience is better with animations turned off. It is perpetually faster and more responsive in use. Applications will open and close instantaneously, making this (already fairly fast) distro feel blazingly fast in use.

But it also makes it feel a bit …Abrupt.

Desktop animations play a role beyond adding eye candy and using resources. They help guide and condition us to anticipate, predict, and know what’s our desktop operating system is doing as we use it. When animations are turned off Ubuntu feels more instant, but lacks a choreography that most of us was would consider “modern”.

For some, the milliseconds spent between action and result are considered wasted.

But if your issues with UI animations on Ubuntu aren’t that they exist but that they’re too slow you need to check out Impatience.

Impatience made our list of the best GNOME extensions for Ubuntu (and any other GNOME-based Linux distro out there) as it’s the simplest, most hassle-free way to change the duration of (most) UI animations used in GNOME Shell — give it a go!