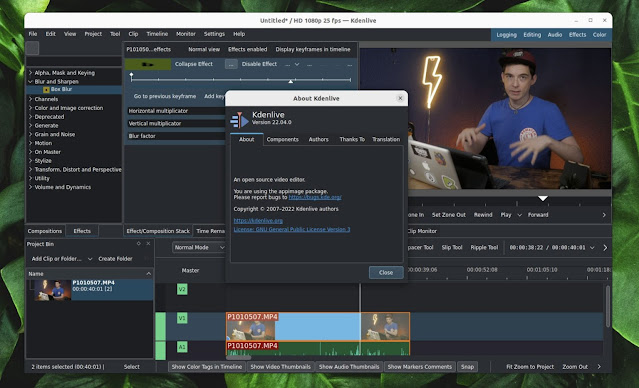 If you’re feeling creative this week be sure to check out the latest release of open source video editor Kdenlive.

Kdenlive’s development team has announced the release of Kdenlive 22.04. This is a major update that carries more than 300 commits. While its devas say this release is ‘mostly focused on stability and polishing’ there are a couple of new features you’ll want to know about.

The biggest ‘new’ feature in Kdenlive 22.04 is support for full range 10-bit colour. This is a pretty huge advancement that will definitely help the non-linear editor find favour with indie filmmakers. The drawback (for now) is that 10 bit colour does not currently work with effects, but that this support is here at all is good enough for the moment!

Also, many of the editor’s built-in video filters benefit from improved rendering speeds in this release, including the Blur, Lift/Gama/Gain, Vignette and Mirror effects. The render dialog underwent a UI rewrite and gains a new custom profile creation tool as a result — another huge timesaver.

Last, but by no means least, this version of the Kdenlive video editor introduces new effect templates. Users can create, configure and share custom effects with each other via the KDE Store and download them into the app directly.

Sharable effect templates are a real game-changer for the community. It now allows those more adept at video editing to offer ready-made effects that less-skilled users can apply to their projects.

You can download Kdenlive 22.04 for Windows, macOS, and Linux from the Kdenlive website. You can also get the latest version of Kdenlive on Flat hub as a Flatpak app. A PPA is maintained to bring new builds to supported Ubuntu releases as well (and you’ll find older versions of Kdenlive in the Ubuntu repos).