Ubuntu is no stranger to the WSL community having been tightly coupled to the boundary-blurring tech since Microsoft first unveiled it in 2016.

And now fans can test ride the latest development release of Ubuntu on WSL thanks to the launch of Ubuntu Preview on the Microsoft Store.

To be clear: Ubuntu Preview on WSL is aimed at developers and enthusiasts. It’s for those who want to live on the bleeding edge and won’t mind the (many) pitfalls that come from running pre-stable code. It’s not for people needing a robust environment to handle their dev workloads.

By installing the new Ubuntu Preview Windows users get a simple, fuss-free way to sample the latest Ubuntu daily builds (which are packed with the latest tools, libraries, fixes, apps, etc) on Windows 10 and 11.

Of note, the latest versions of Ubuntu for WSL on Windows 11 include support for (what was previously referred to as) WSLg, which lets you run GUI Linux apps on the Windows desktop. It never ceases to disturb me: 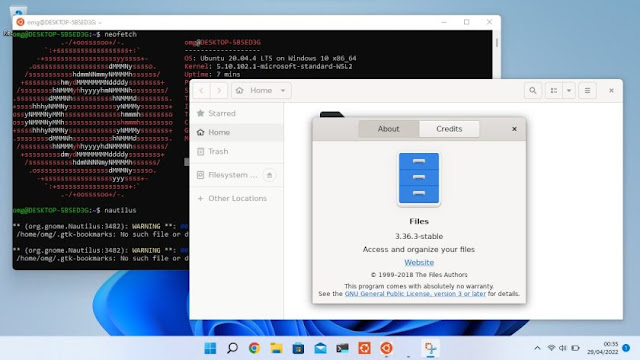 Those seeking more stable foundations for their WSL experience should, of course, stick to a stable Ubuntu release. Several are available on the Microsoft Store, including the recently-released Ubuntu 22.04 LTS.

But for those keen to ride the development wave of Ubuntu 22.10 ‘Kinetic Kudu’, these preview builds are the idea way to get involved.

Do you use Ubuntu on WSL? Are you making use of all the neat integrations the distro offers? Let me know your thoughts on it, and if you plan to install this development version, down in the comments.