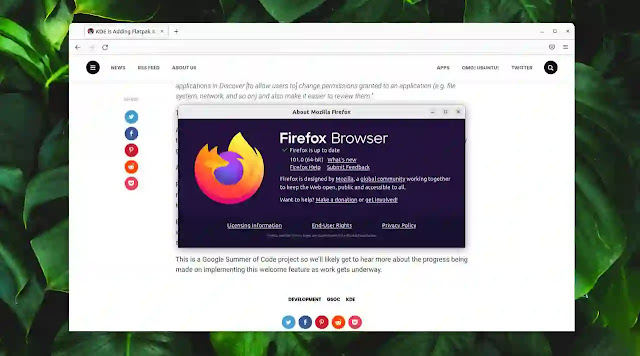 With celebrations for its centenary release now done and dusted it’s back to basics for the Firefox development team.

Releasing May 31, 2022 is Mozilla Firefox 101, a stable release update carrying a couple of minor new features plus a bunch of bug and security fixes.

First up, accessibility. Firefox 101 adds supports the prefers-contrast media query. This allows web sites to discern if a user has asked for web content to be presented with a higher (or lower) contrast than default. Ground breaking it isn’t, but welcome it is.

You may remember Firefox 98 streamlined the download process by no longer nagging you what to do when attempting to downloaded files. Firefox 101 walks that back.

Two ‘download’ options are present in the General > Applications section. Using these you can choose ‘what should Firefox do with other files’ (which don’t already have a decision added). You can automatically save ’em (the ‘Chrome’ way’) or get the browser to ask you where to save them/open them each time (the old Firefox way).

Among the (many) fixes are some Linux-specific patches to solve lag and stutter on about:newtab settings page; handle an issue with un-docking windows on Ubuntu 22.04 multi-monitor setups; and solve crashes involving FFmpeg 5.0.

Security conscious? You’ll be relieved to hear this release addresses the MFSA 2022-19 advisory.

If you use Windows or macOS and you have Firefox installed you will get this update automatically on release day or thereafter. On Linux you’ll receive the Firefox 101 update through your distribution’s preferred update route, be that the Snap Store (e.g., Ubuntu 22.04), the Ubuntu repos (e.g., Ubuntu 20.04), or a separate distro-specific repo (e.g., Linux Mint).

If you do video conferencing regularly with Firefox web browser, you may now use as many microphones as you want, at the same time. It allows to switch your microphones at any time, if your conferencing service provider enables this flexibility.

We’d like to extend a special thank you to all of the new Mozillians who contributed to this release of Firefox!