Whether you’re an eager GNOME acolyte or just a casual admirer, there is a lot to enjoy in the latest version of the GNOME desktop environment. 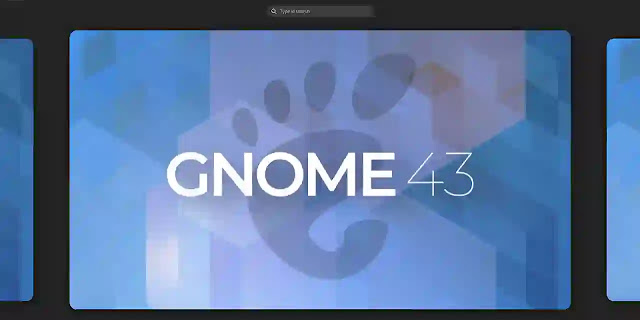 GNOME 43 arrives six months after the (rather) substantial GNOME 42 release. In many respects it’s a direction continuation of the path set out there, and contains confident collection of changes, some small, some big, but all intended to make it easier to use GNOME. I whip through the core user-facing changes in this post, share a few screenshots, and give a few of my thoughts on some of the chances based on first-hand experience of using it. If you read my run-through of GNOME 43 new features — gold star for those who did — most of the changes I mention below will be familiar to you. Let’s dive in!

For me, the “headline” feature in GNOME 43 is the striking new Quick Settings menu. Quick Settings gives you overview access to network, wi-fi, performance mode, nightlight, aeroplane mode, and even dark mode. It makes many tasks a ‘one-click’ affair, while other tasks, such as changing wi-fi network can now done entirely from the status area. It’s also possible to change audio output (and input) in GNOME 43 straight from the volume slider. This is a MASSIVE time saver when compared to the way GNOME 42 handled things (you had to open Settings, go to the Sound panel, and change things from there). In GNOME 43 it’s a mere click or two. Unexpectedly, one part of the new Quick Settings menu I’ve been using the most is the new ‘screenshot’ button (in the gif above it’s in the top row, far left, but on laptops that area relays battery status to the screenshot icon moves over to the right) as some of my keyboards lack a print screen key. This helpful dot remedies that.

GNOME 43 ships with an improved file manager in the form of Files (aka Nautilus). Refreshed using GTK 4 and libadwaita, Files gains an adaptive design that lets you use all of the file manager’s features when resizing windows to a narrow(er) width. I find the slide-out sidebar in narrow mode very well implemented. Other changes resulting from the transition to GTK4 include revamped file and folder properties windows, reordered menus, and a massively improved list view that adds rubber banding and file favouriting. You’ll also find extra integration with the Disks utility, such as being able to access a ‘format’ option when right-clicking on an external drive in Files’ sidebar; and there’s a new Open With dialog so you can choose which app is used to open different file types. You can learn more about the changes to Nautilus in my feature looking at Nautilus in GNOME 43. 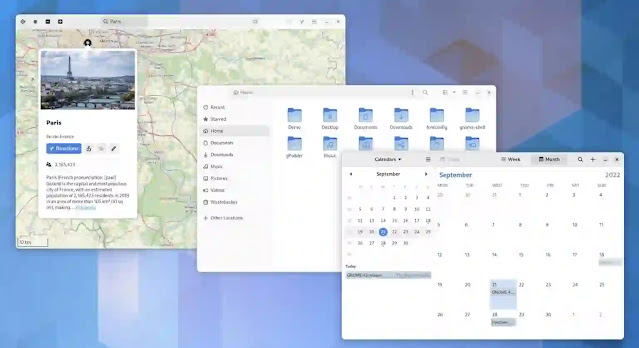 Fan of the Calendar app will want to check out the app’s new sidebar. This always-on-show panel gives a monthly overview and lists upcoming events. Resizing Calendar to a narrow width hides the “main” canvas to show just the sidebar. A refreshed color palette helps ensure the app is as perfectly parseable at-a-glance, as possible. The Maps app looks a lot nicer now it’s using GTK4 and libadwaita, with elements like pop overs finally getting UI shadows. The pinch gesture for zooming is greater robust, a benefit derived from switching to app to a new map rendering library. Developers firing up the latest version of Builder will notice a major UI revamp, including tabs, a new status bar, support for rearranging panels to create custom layouts, rejigged and refined preferences, and a new command editor. A new Device Security page is available in Settings. This aims to “provide information about the security of your physical hardware, its configuration, and its firmware”. Though well intentioned, this panel feels intimidating. Many of the “security issues” it flags (in bold red colours, no less) are ones a user doesn’t have control over. Ubuntu devs aren’t convinced either, and will disable this page in Ubuntu 22.10. I expect we’ll see a lot more work in this area during the GNOME 44 development cycle.

And finally, GNOME 43 has a new default alert sound! Yes, the (rather annoying, imo) ‘drip’ sound familiar to anyone who’s tried to tab their way to nowhere in a terminal is now a more pleasant ‘click’ — though do bear in mind many Linux distros change the defaults so what you hear may vary!

Want to try the latest, greatest version GNOME out for yourself? Well, here things get a bit tricky. GNOME 43 will roll out to users of rolling release distros (like Arch) but those on fixed-release distros (like Ubuntu) will (in most instances) need to wait until their next major release rolls around. The bulk of GNOME 43 will make it into Ubuntu 22.10, due next month, and is the star attraction in the very-soon-to-be-released Fedora 37. Don’t want to wait? You can use the GNOME OS image in the Boxes virtual machine app.
Linux News ubuntu
Next Post Previous Post
No Comment
Add Comment
comment url
desktop environments,gnome,GNOME 43,Linux,News,ubuntu