How to Make Console the Default Terminal App on Ubuntu, Ubuntu developers have decided not to make GNOME’s Console the default terminal emulator in the upcoming Ubuntu 22.10 release, but that doesn’t meant you can’t.

Console is billed as a “simple user-friendly terminal emulator for the GNOME desktop” and, by all accounts, that’s exactly what it is. Functionally speaking, it’s not as advanced as GNOME Terminal, which is the VTE Ubuntu and most Linux distros that ship the GNOME desktop environment use. But honestly? Speaking as a Linux user who uses the terminal daily for package management, system monitoring, and playing around with awesome command line tools like ncdu, mapscii, and musikcube, I’m yet to encounter anything Console can’t do. Plus, the design of Console is in keeping with the rest of the modern GNOME desktop. That’s not to say GNOME Terminal looks bad (like, at all) but those deftly rounded window corners do look nicer to my eyes. I also like that search is integrated within the app rather than being a pop out dialog; I like that it supports light/dark mode; and I like that the terminal turns red when sudo is active, and purple when using ssh. And though it’s something you can enable in most terminal apps, I like that Console delivers command done notifications by default.

Okay, so I’ve bored you with the background on why I like Console, so if you do too, and you want to make it the default terminal app in Ubuntu, here’s what you need to do. 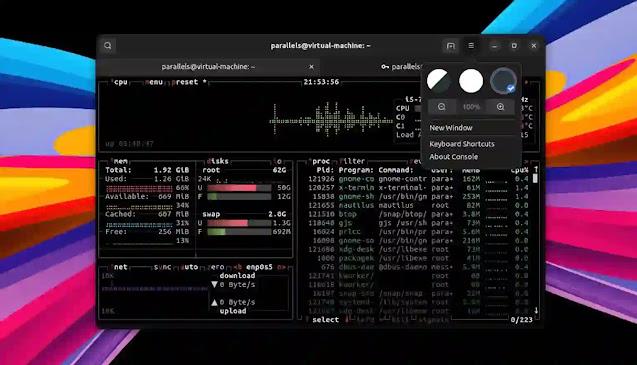 Open a new terminal session and run the following command to register Console (which is referred to by its codename of London’s Kings Cross Station whose station code is KGX) as an alternative you can use:

Then run this command to actually set Console as default:

Now, whenever you press ctrl + alt + t a new Console window will open instead of a new GNOME Terminal one.

To un-do the change — insert shocked emoji at the mere idea, here — run:

And pick the appropriate number from the list of VTEs shown to you, and hit enter to accept.

Bonus tip: want to make it super-duper easy to open a specific location from Nautilus in Console? Install this extension:

Restart Nautilus (nautilus -q) and when you right-click on a folder you can select the “Open in Console” menu entry to… Well, I’m sure you can figure that out